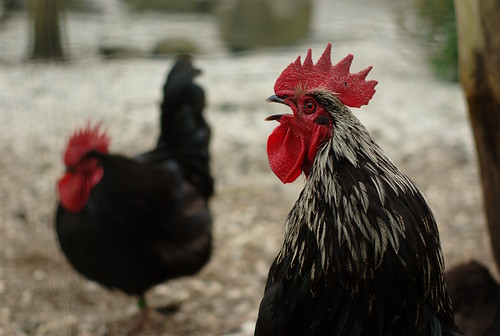 The birds do not breed 100% true as regards leg length. The short-leg condition is due to one of the many well documented examples of lethal genes present in poultry, this particular gene is known as the Creeper Gene (Cp), which shortens the bone length in the limbs, a characteristic most noticeable in the new hatched chicks where the legs are much shorter, and stronger than those of the normal leg length chick. Cp is dominant to cp and causes the legs to be shorter when present in a single dose, (Cpcp) whereas when it is present in a double double dose, (CpCp), it is lethal and the embryo dies on or about the twenty-first day of incubation. The creeper gene is incompletely dominant so, when two short-legged birds (Cpcp cock x Cpcp hen) are bred, resulting progeny in: —-

If short leg (Cpcp) is bred with normal leg (cpcp), F1; 50% short leg–50% normal leg length ,and two normal leg length (cpcp) birds, are bred, 100% normal leg length would result. Important to note that, since CpCp is lethal, then the progeny will give a 2:1 surviving ratio, two creepers to one normal length bird, instead of the usual 3:1 ratio, (Mendal Rules) although these ratios can only be approxamate as they must be averaged over large flock numbers, and also, breeding strain and strength must be taken into account. The same gene is present in the German Kruper hen, French Courtes Pattes, Japanese Jitoko and Chabo, also the Manx cat and Dexter cattle.